ATTENTION: An important change took place on January 1, 2021 regarding currencies. Cuba has put an end to its dual currency system (CUC and CUP). This long-anticipated unification leads to the definitive removal of the CUC (Cuban convertible peso) in favor of the CUP (Cuban Peso). More information in our Money section.

CAYO SANTA MARIA is a small key, 16 km (10 mi) long by 2 km (1.2 miles) wide, located in the Bahia de Buena Vista, off the northern coast of the main island of Cuba, in the province of Villa Clara. With its two neighbors, Cayo Las Brujas and Cayo Ensenachos, they together form a quiet resort destination with stunning beaches, called "Los Cayos de Villa Clara". These cayos (keys) are connected to the main island of Cuba by a 48-km (30-mi) causeway (called Pedraplen in Spanish), from the coastal town of Caibarien.

These Cayos are part of a larger archipelago called Jardines del Rey (King's Garden), which is currently the most active area in Cuba for tourism development. Once completed, the archipelago should reach a capacity of more than 32,000 rooms distributed in the following islands (from west to east): Cayo Las Brujas, Cayo Ensenachos, Cayo Santa Maria, Cayo Guillermo, Cayo Coco, Cayo Paredon Grande and Cayo Cruz. This Cuban archipelago could thus become the largest seaside resort in Cuba, surpassing Varadero in the number of hotel rooms.

The three "Cayos de Villa Clara" (Cayo Santa Maria, Cayo Las Brujas and Cayo Ensenachos) alone will have more than 12,000 rooms. Tourism development started on Cayo Las Brujas in 1999, followed by Cayo Santa Maria (first hotel in 2001) and Cayo Ensenachos in 2005. The size of the hotels vary largely from 24 rooms up to 1,020 rooms, click here to view a Chart of the number of rooms per hotel.

Click this link for a detailed Chronology of tourism development in the Cayos of Villa Clara.

Cayo Santa Maria is part of the Villa Clara province but is located only about 30 km (18.6 mi) as-the-crow-flies west from Cayo Guillermo and Cayo Coco, two other popular beach destinations in the nearby province of Ciego de Avila. Learn more about the other islands of: Jardines del Rey. 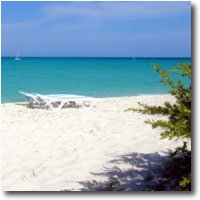 Cayo Santa Maria's main attraction is without a doubt its 13 km (8 mi) of magnificent fine sand beaches, divided in three sections. The beaches and hotels are all located along the northern coast of the island, while the south coast is mainly dominated by forests, salt marshes and mangroves.

Click to see an areal view showing the position of the hotel and services on Cayo Ensenachos.

Click to see an areal view showing the position of each hotel and services on Cayo Las Brujas.

Click to see an areal view showing the position of each hotel and services on Cayo Santa Maria.

With the nearest international airport being located in Santa Clara (the capital of the province of Villa Clara), it takes about 90 minutes by road to reach Cayo Santa Maria; the first 60 minutes or so is through the Cuban countryside and the towns of Remedios, Camajuani and Caibarien, and the last 30 minutes on the causeway (Pedraplen) with the sea on both side. There would supposedly be a project to build an expressway to join the pedraplen in about 30 minutes, which would make it possible to reach the cayos in less than an hour in total. Note however that the current 90-minute ride is not monotonous, on the contrary; it gives the opportunity to visit a bit the region and admire the scenery. Besides, a local guide accompanies each bus carrying tourists to the cayos, he/she describes what we see along the way and talks about the history of the region, the local industry, and about Cuba in general. You can usually buy some drinks on board the transfer bus (or just before boarding), such as a cold beer "cerveza fria" at a cost of $5 for two beers, any currency accepted.

About the causeway (pedraplen): This colossal project was the work of the company "Campaña de Las Villas". The construction began in 1989 and was completed in 1999, paving the way for the development of mass tourism in this region. It’s on September 12th, 1989 that former president Fidel Castro, while visiting the area, officially assigned the team that would undertake this great project, and on it's on December 15th, 1989 that the first stone was tossed into the sea. One of the top priorities was to preserve the environment with the construction of several openings (bridges), 46 in total for a total length of 2,298 meters (7539 ft.) of bridges, allowing an uninterrupted flow of ocean currents to minimize damage to the ecosystem of the archipelago. The work has received international recognition, including an award in 2001 for its high economic effect with the least impact on the environment.

We learned that there would also be a project to build a water park (either near the dolphinarium or at the east end of Cayo Santa Maria), and a golf course in Dolores, a village located a few kilometers from the town of Caibarien (where begins the causeway to reach the cayos).

It’s obvious that the 10 years of effort required to build the causeway to connect the "Cayos de Villa Clara" with the main island of Cuba was paving the way to make this region an important tourist pole. In a relatively short period of time Cayo Santa Maria has become one of the most important resorts in Cuba, but despite this rapid development, it remains a charming little island, quiet, and safe.

Our cayosantamaria.info website has been online since 2002. In 2017, we were celebrating the 15th anniversary of the very first version of our website. It’s updated regularly, and we humbly believe it is the most complete and detailed source of information about this Cuban destination. Having no business relationship (or otherwise) with any hotel chain or the Cuban government, our websites are created simply and solely for the purpose of keeping you informed about this beautiful Caribbean island that we had the chance to visit dozens of times...